In MRI, gradients are smaller magnetic fields applied to the main magnetic field of MRI machines in order to cause dephasing. Dephasing is the loss of net magnetization, which occurs on the transverse plane, and is a result of single nuclei changing orientations along their rotational axis. These gradients have a different field strength than the main field, resulting in movement of the particles called diffusion. When diffusion is unrestricted in all directions, it is isotropic. When there are normal anatomic barriers, such as those present in myelinated axons of neurons in white matter, diffusion occurs in the directional along the axon’s axis. This directional diffusion is referred to as anisotropy. Alternatively, water molecules in grey matter or in cerebrospinal fluid move in a less directional manner and is therefore described as isotropic.

Anisotropy is the basis for diffusion tensor imaging (DTI), which measures direction and speed of directional, or anistotropic, diffusion. It reveals tissue architecture by imaging the diffusion of these water molecules. To determine the diffusion of water molecules, a comparison is conducted between images created with and without the aforementioned dephasing gradients by setting the b value, representing strength of the magnetic field gradient, to zero. 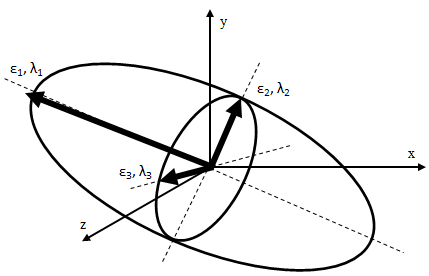 In DTI an ellipsoid is used to convey the locations in which water can travel (Figure 1). Experts can detect alterations in anisotropic diffusion that reflect a deviation from normal anatomy. For example, white matter is expected to be anisotropic, so demyelination is associated with abnormal findings. This likely occurs secondary to the loss of myelin membrane integrity enabling the water particles to move in another direction, such as perpendicular, rather than only parallel to the axon’s axis. Moreover, physiologic motion artifacts, such as a patient’s heart beat, can confound the image.
.