Individuals with a criminal record generally have poor subsequent employment prospects. One possible explanation is that employers are reluctant to hire individuals with a criminal record, regardless of other qualifications. Alternatively, some researchers have argued that the main reason for difficulty in the hiring process is secondary to poor educational histories, emotional problems, and other intrinsic/extrinsic characteristics that lead to criminal behavior; these serve as signals to employers that such individuals are poor prospects for employment. Given that a disproportionately large number of young African American men experience imprisonment, racial discrimination may contribute to or complicate the effects of a criminal background on employment.

In an attempt to separate the effects of race from criminal record when analyzing the chances of securing employment, researchers conducted an audit in a state which barred employers from discriminating against based on criminal records, unless the crime was closely related to job function. In this study, two same-race pairs (one black pair and one white pair) of 23-year-old male testers applied in person to randomly selected entry-level positions presenting similar employment histories and educational backgrounds. The pairs were randomly assigned to apply to different positions; for each position, one member from each pair was randomly assigned to indicate a criminal record of selling cocaine when applying. Individuals who were invited to an interview or offered a job on the spot were coded as having been called back. These data are depicted in the figure below. 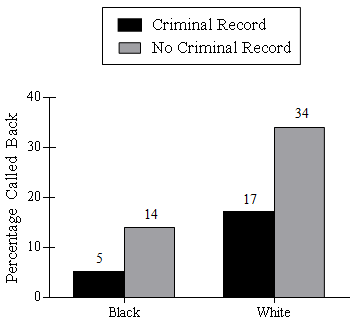