Operant conditioning is a form of learning in which associations are formed between actions and consequences. To study such behavior trends, a container was designed to hold pigeons that were specifically trained to peck a key when a green light was illuminated. This study animal was chosen given its high response rate to painful punishments as well as to food rewards, as opposed to many other animals which respond mainly to punishment in terms of learning. A red light was also present in the study system. The green light would be turned on every third stimulus administration; the red light was illuminated during the other administrations. If the pigeon correctly pecked the button in response to the green light, some food would be dispensed. If the pigeon pecked to the red light, a minor shock was be applied to the pigeon.

A group of researchers expanded on this research by examining various reinforcement schedules and how they affect laborers performing redundant tasks. College-age students were trained to properly fold origami cranes and were separated from other students such that they could not observe each other’s cranes. Of particular interest was whether time pressures would affect the morale of students performing the tasks. In the first trial, each student was provided three minutes to construct ten cranes. If they were unable to complete this task, they would receive no reward; if they successfully completed the task, they would receive $4. Participants underwent three such attempts in the first trial. After this first trial, students were given the option to proceed to the next trial or to simply stop and collect winnings. They were told that each subsequent trial would involve ‘investing’ their earnings; this implied that they would earn $8 rather than $4 for subsequent rounds. However, at the end of each subsequent trial, a coin would be flipped; they would keep earnings if the coin landed on heads, however would receive no winnings if the coin landed on tails. 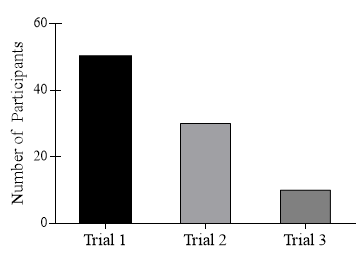