A recent study sought to investigate relationships among various identities, including moral identity, mental health, risky behavior, and overall psychological well-being in a sample of college students. Identity commitment was defined as the extent to which respondents have made commitments to a particular identity as measured by items such as “I know the direction I want to take in life;” higher scores in this metric indicate greater commitment. To measure moral identity, participants were presented with a list of moral qualities and asked if they agreed that being a person who possessed such qualities would make the subject have a feeling of approval; higher scores indicate greater endorsement of morality. A composite index of depression was used with higher scores indicating greater depression. Both identity commitment and moral identity were found to be negatively correlated to depression, anxiety, and hazardous alcohol use and positively related to self-esteem. The figure below shows the depression-commitment interactions at multiple levels of moral identity; the interaction between depression and identity commitment is stronger for higher levels of moral identity. 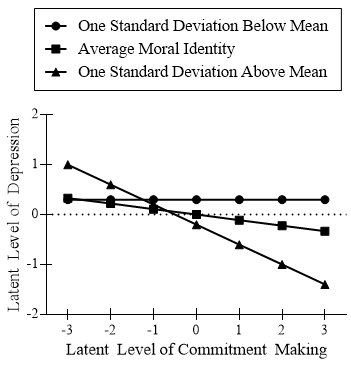 Figure 1. Interaction plot of link between commitment making and depression at various levels of moral identity.
.