The transfer of oxygen from air into the blood is influenced by a number of factors, including available oxygen concentration, red blood cell count, and concentration of the hemoglobin. As air enters the lungs, oxygen diffuses into the capillaries of the alveoli, where the oxygen makes contact with the hemoglobin in erythrocytes. The diffusion of oxygen and carbon dioxide in the lungs is related to the partial pressures of the gases, as shown in Figure 1.
. 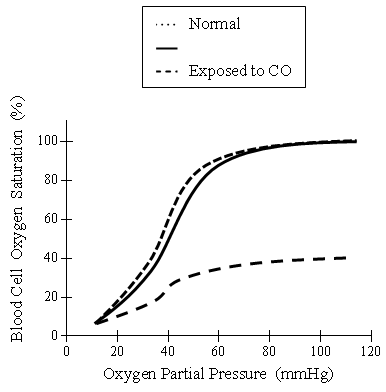 The rate equation for the release of carbon dioxide from the periphery into the bloodstream is given by:
.