The atomic radius of an element refers to the distance from the center of the nucleus to the farthest point of the electron cloud. Atomic radius is connected to the other periodic trends, such as ionization energy, electron affinity and electronegativity. The connections among these trends are largely due to the electron configurations of the elements. The relative electron configurations of the elements are responsible for forming these patterns. 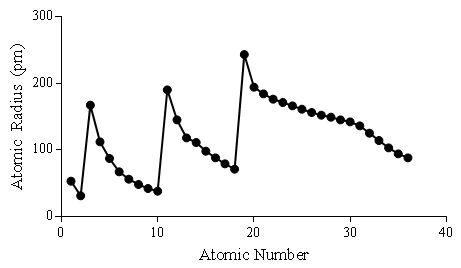 Ionic radius is of particular interest in understanding the selectivity mechanisms of ion channels. The KcsA potassium channel has a high degree of selectivity for K+ ions. Even ions such as Na+ are unable to pass through the filter. The filter is part of the channel itself and represents the narrowest area of the channel. Along this filter are 4 subunits with the amino acid sequence TVGYG whose carbonyl oxygen backbones face their oxygen atoms toward the center of the channel. The widths of these channels are standard across organisms and the selectivity sequence is highly conserved in nearly all living things. As each ion enters the channel, its hydration layer is displaced by the carbonyl oxygen atoms of the filter. A new hydration shell surrounds the ions as they exit the channel.

Figure 2. Structural diagram of KcsA selectivity filter with 2 out of 4 subunits of the filter shown.