Sexual preference has been seen to change with temporal variation. One group of researchers studied women’s mate preference and related behavior over the course of a menstrual cycle; these researchers specifically investigated whether such preferences extend to the social presence and direct intrasexual competitiveness of men. The researchers defined these terms as follows: social presence was defined as appearing composed, athletic, maintaining appropriate eye contact, and lacking self-deprecation or downward gaze; intrasexual competitiveness was defined as successful competition with other males from a mating perspective. In the study, women rated the attractiveness of men as short-term sexual partners and long-term relationship partners after viewing videos of them during a short interview. A summary of the findings is presented in the figure below. Days 6 to 14 were considered fertile days, with Day 12 being considered the most fertile. 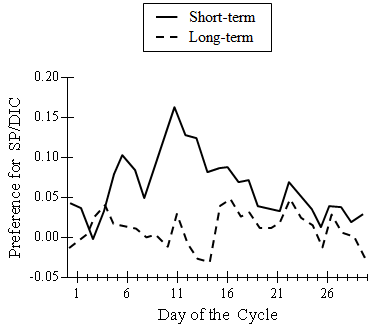 Figure 1. Preference for social presence (SP) and direct intrasexual competitiveness (DIC) in short- vs. long-term mates as a function of day of the menstrual cycle. Data were normalized to objective attractiveness of the male participants.
.