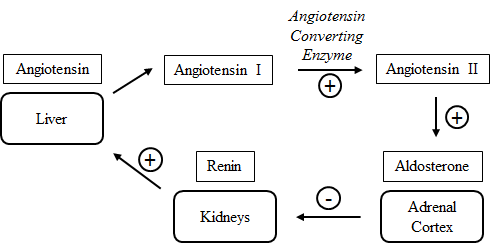 In the kidneys, low blood volume signals the juxtaglomerular cells in kidney nephrons to produce renin, which upregulates the conversion of angiotensin into angiotensin I. Later, angiotensin converting enzyme converts angiotensin I to angiotensin II, which directly stimulates the adrenal cortex to produce aldosterone. Angiotensin has several physiological functions by itself, including increasing vasoconstriction of arteries and increasing the rate of reabsorption of sodium into nerve cells.

Recent work has generated four new drugs which are believed to be capable of reducing blood pressure and treating hypertension. The drugs were tested on 100 subjects that were selected based on chronically high blood pressure of over 160/110. The subjects were divided into four groups of 25 patients each and given a daily dose of their assigned drug in 15 mg pills.